As a country, the United States benefits significantly from a more stable Moldova and one that views our country favorably. The existing relationship originally evolved from a partnership between the NC National Guard and the Defense Forces of Moldova. Clearly, that relationship remains firm and serves as a foundation. However, we need more than friendly interactions between military forces to keep our country safe and economically secure. The relationship between North Carolina and Moldova has contributed greatly to our Country's favorable presence in the eyes of the governmental, professional and civic leaders of Moldova. At present, there are substantial NC-Moldova interactions in the academic, cultural, business, religious and military circles.

Moldova is a proud country with an intelligent and educated population. Yet, Moldova presently experiences adverse economic conditions because of historical circumstances. Over the past five years, the extensive interactions between NC and Moldova institutions and peoples have provided an open window between our societies, which has a value beyond measurement in dollars, and cents. Throughout Eastern Europe the NC-Moldova partnership is viewed as one for others to emulate in order to help these countries develop civic and governmental institutions that will stand the tests of time. The formal relationship was renewed in 2010 for an additional five-year term and I have remained as the Co-Chair of the implementation committee.

Click here to see the 2010 Romanian version of the agreement

Click here to see the 2015 Romanian version of the agreement

Click here to see the 2019 Romanian version of the agreement 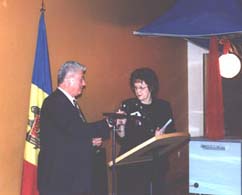 How can we make this page better for you?